“Gabbett (2016) describes the training-injury paradox, and the phenomenon whereby athletes accustomed to high training loads have lower injuries compared to those training at lower loads. This model is based on the evidence that non-contact injuries are not as a result of training per se, but more likely by an inappropriate training program. Excessive and rapid increases in training are likely most responsible for a large portion of non-contact soft tissue injuries (Gabbett, 2016).

High training loads as well as physical conditioning are shown to be protective factors against injury (Gabbett, 2016). Gabbett (2016) proposed that in order to maximize sports performance, athletes need to train at an appropriate load so as to decrease the negative effects of training, such as injury and illness. Should athletes be able to train safely in periods of high physical loads, it may serve as a protective factor against injury and possibly improves the athletes adaption to load (Gabbett, 2016).

As load has been found to be a significant factor relating to risk of injury, it would seem logical to assume that there should be an optimal training load so as to decrease the risk of injuries and/or illness among athletes consequently improving performance. “. 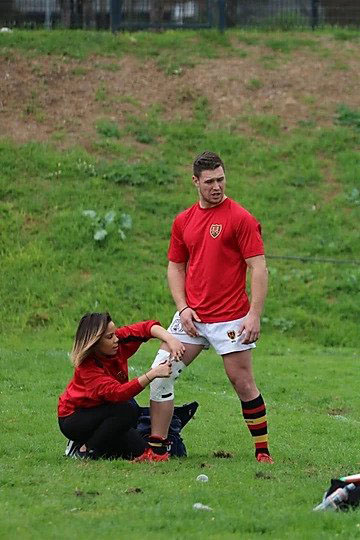 Andrea Damon is a passionate health and exercise enthusiast with a special zest for life. She is currently doing her MSc. with research into the training loads and injury profiles of Half Marathon Runners, and we eagerly await to see her research. She is a field-side and outpatient orthopedic physio working at Bishops and with Hamiltons RFC. She’s been a great supporter of our blog and it’s an honor to finally have her featured – thank you Dr. Dre!